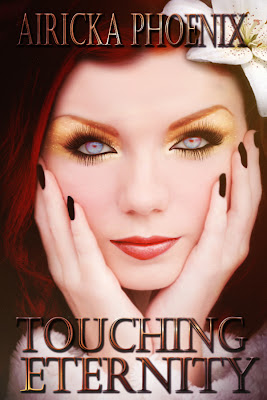 TOUCHING ETERNITY What would you choose? She had everything but freedom. He had nothing but his loyalty, his wits and his training. She was a prisoner, a disease, not fit for the world, and she didn't know why. But she did know she wasn't allowed to die, she wasn't allowed to live and she wasn’t sane. He was a soldier, a protector, but his foundation will be tested when he must destroy the only light in his dark world. Thrown together, prisoner and keeper, their rebellion will splinter through time, changing the course of history and the fate of the world. Their love will challenge their greatest enemy and immortalize them forever. Loyalty. Freedom. Love. What would you risk? "Let me die." Pain darkened his eyes. "Never." The Book Airicka Phoenix is the author of TOUCHING SMOKE (Touch Book #1), TOUCHING ETERNITY (Touch 1.5), TORRID, a short story as part of the Whispered Beginnings: A Clever Fiction Anthology and WANTING & INTENTIONS, two stories as part of the Midnight Surrender Anthology. When she's not hammering away at the keyboard, she can be found banishing pirates or crawling through the attic looking for lost treasure with her kids. She loves baking, gardening and reading. She also likes to travel and take pictures of everything she comes across. When asked, Airicka describes herself as a sarcastic basket case that has an unhealthy addiction to chocolate, old movies and really bad jokes. She loves to laugh, make friends and write. If she could have one wish granted, it would be to spend one day as a fly-on-the-wall inside Stephen King's mind. If she could have two wishes granted, she would ask for a castle dedicated entirely to her overwhelming collection of books.