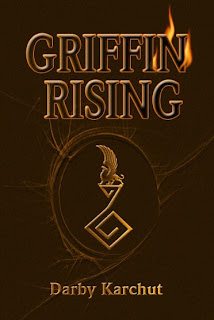 For centuries, rumors have abounded of a lowly caste of supernatural beings known as the Terrae Angeli. Armed with the power to control Earth, Fire, Wind, and Water, these warriors secretly serve as guardians for mortals in danger.But for one young angel-in-training, Griffin, life is hell as a cruel master makes his apprenticeship a nightmare. On the verge of failing, a new mentor, Basil, enters his life and changes it forever.Taking on the identity of father and son, Griffin and Basil forge a special bond where honesty and trust go hand in hand to secure Griffin's destiny as a Terrae Angeli. Griffin's belief in himself and the love of a mortal girl are the perfect combination in overcoming the darkest days of his life. But will it be enough for him to succeed?For Griffin, it's time to angel up.

Griffin Rising is one of those books that takes you by surprise. I am so grateful to be a part of this blog tour hosted by AToMR. As I read this ARC I was completely blown away. As most of you readers know I love Angel stories. I love how things are real for them. They experience the good with the bad. Life is like that nothing is easy and fair and life definitely is not a bowl of cherries. In Griffin Rising we meet Griffin who is an angel in training called Terrae Angeli. The Terrae Angeli control the four elements of the world earth, fire, wind, and water. They protect the humans from danger. They train hard so they are able to harness their abilities and save the mortals when they have to.

Griffin has had a rough go round with his training due to his master. He is evil and full of hate causing Griffin to work harder and suffer abuse from him. Everyday Griffin tries hard to please his master and master his gift but his master is just cruel and is bent on hurting Griffin. Then one day a new trainer comes into Griffins life named Basil. Basil is everything Griffin needs and wants. Basil is full of love, compassion, and patience. Griffin and Basil become insuperable becoming father and son which helps Griffin master all the things he has to in order to become a Terrae Angeli.

I loved Basil so much as a character because he was everything a father is and should be. He took his time with Griffin even when Griffin was frustrated or angry. Basil had patience and loved Griffin even when Griffin couldn't love himself. All Basil wanted was to help out Griffin and the more time they spent together and the more love Basil showed Griffin the stronger Griffin got and was able to harness the gifts he was born with.

This book had me on such an emotional roller coaster. What Griffin suffered through at the hands of that evil master had me ready to reach int he book and kick some serious butt but when Basil came into the picture I cried. Basil showed so much patience and strength that got Griffin through the worst of his life it was EPIC! I am so looking forward to reading Griffin Fire. This is a must read for everyone who loves Angels and stories of people overcoming the worse in life to shine. 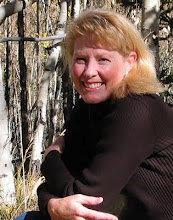 Darby Karchut is an award-winning author, teacher, and a compulsive dawn greeter. She lives in Colorado with her husband and owns more backpacks than purses. As she should.

She has also co-authored a non-fiction book for teens entitled MONEY AND TEENS with her husband, author Wes Karchut.

Visit the author at her website:www.darbykarchut.com

GIVEAWAY: US ONLY and will be two autographed copies of Griffin Rising
a Rafflecopter giveaway

A Diary of a Book Addict: Review

Have Book, Will Read: Review

AToMR: Character Interview
Posted by Tee at 7:46 AM