Escape To Me by Diane Alberts Blog Tour Stop 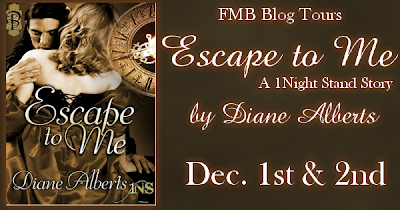 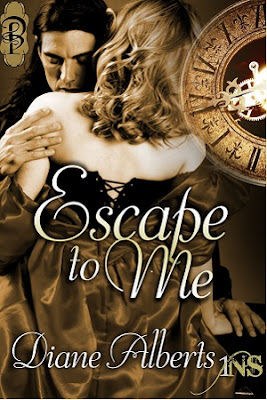 Eleanor is tired of being a spinster no one ever notices. Life for a twenty-six year old unwed woman in 1811 is dreadfully dull. She can’t have an affair at the risk of ruining her family’s reputation…unless she finds a way to do so without the slightest risk of discovery. Dare she travel two hundred years into the future to have a 1Night stand with the help of Madame Eve?

Thomas struggles daily to move on after the death of his beloved countess, but being the most highly sought after bachelor of the ton doesn’t allow him much privacy to do so. All he yearns for is a night of lust and fun, with a woman who can make him remember what it feels like to be swept away by passion. Traveling two hundred years into the future seems to be the perfect solution for both discretion and ease.

What will happen when they discover they didn’t escape their lives at all, but merely found each other?

Escape To Me is a short erotica novella that I loved so much I needed more! Dare I say that I love how passionate the men of the 1700's and 1800's were. There was no head games it was pure passion, lust and fun. This novella captured all of that and more. The time travel idea had me turning the pages quickly and before I knew it I was swept away wanting my own Earl.

Thomas is an Earl who is mourning the loss of his Countess. He is the most sought after bachelor and he has no privacy and no desire to marry right away. He just wants one night of pure passion, lust and sex to lose himself into so he can remember what it feels like to have one night of passion that his countess gave him. He wants to have his heart pounding and blood racing through his veins and lose himself in the throws of passion. So when he finds Madame Eve and her time traveling offer he jumps at the chance to lose himself. What he gets is so much more......

Eleanor is a 26 year old Spinster whose time is coming to an end. She knows she has to wed but she just wants to have one night of passion filled sex. She wants to do things that are impulsive and will cure her cravings. Is one night to hard to ask? Well yes because she is supposed to save herself for her husband. So when she meets Madame Eve and her time traveling idea Eleanor jumps at the chance to do it. She wants just one night to make love passionately to do things a women of her upbringing never says out loud.

What happens next between her and Thomas is amazing! So so amazing that you have to read it to feel it and see what happens when passion, lust, and pure unadulterated sex happens between two people who clearly belong together!

Heart racing, she towed him to where the wine sat. She’d need to loosen up a bit to fool him into thinking she hailed from this time. Though she should run away without delay, the night carried the possibility of bringing her fantasies to fruition. In this very room, the man she’d pined for, the one she’d yearned to have, stared at her with hunger. Thomas wanted to make love—with her, of all people.

Who would’ve guessed it?

“So, Eleanor, tell me, where are you from?” He grabbed the wine, a brow raised as he grabbed the corkscrew to open the bottle. He studied the object, flipping it in his hands, and then put the sharp, twisty blade in the cork.

She could almost hear his thought process as he compared the modern version to the ones they were familiar with. He tossed a smile over his shoulder and poured two glasses. Giving one to her, he motioned for her to sit down on the couch. Once she did so, he sat so close beside her that their legs touched. The heat from his body pressing against hers caused to tremble and almost spill the wine over the rim, even though he’d filled it only three-quarters full.

“I’m from London. My family has an estate out near Devon, but we seldom use it.” Eleanor sipped her beverage, proud of her response. She sounded so…sophisticated. One would never guess she hovered a mere second away from exploding with anxiety. “You?”

“I live far away. I’m in town for a night, and then I return home.”

Now, that was an understatement, if she’d ever heard one. Two hundred years away, to be exact.

She held back a trill of laughter at his perfect reply. Clients were urged not to reveal the truth of their origins. Most people remained unaware of the joys of time-traveling—and the company preferred to keep it that way.

She licked her parched lips. “Oh, is that so? How fortunate for me to have the pleasure of meeting you before you leave.”

He studied her mouth, and her insides clenched at the dark hunger she saw within. How was it possible that he could be so ravenous—for her?

“Indeed, how fortunate. I almost backed out, thinking it silly of me to do something so frivolous. Then, I thought, perhaps it could be an interesting diversion for the night.” He finished his wine, and she hurried to follow suit. He refilled her glass first, then his, before turning to face her. His lips turned up at the corners, and she took another taste to steady her nerves. “I daresay it might end up being much more than a simple distraction.”

Her heart skittered to a stop, and she choked on her wine.

Dear God, does he know who I am?

He set his drink down, plucked her glass out of her grasp, and placed it on the table next to his. His brow crinkled with worry, he pounded on her back. The force behind the blows made her stumble out of the seat, so he gripped her elbows to place her on her feet before repeating the action. She didn’t know which made it harder to get air into her lungs…the wine or his “help.”

She waved at him and croaked, “I’m fine.”

His fingers tightened on her shoulders. “Are you alright, La—Eleanor?”

“You know?” He’d almost called her by her title. How had he figured out the truth? She stared straight ahead, scared to look at him, and stepped out of his arms. “H-How do you know?”

She realized her lapse in judgment before he finished speaking. He hadn’t known she was a lady—he had just slipped up by addressing her as he was accustomed. She choked on a nervous bubble of laughter. His brow arched, so she coughed to try and disguise her laugh under the after-effect of choking on wine.

He hadn’t the foggiest notion about her true identity. He’d called her Lady out of habit. Not knowledge. Stepping closer, she smiled up at him and brushed a finger down the curve of his jaw. She’d always wanted to do that Always wondered what the stubble on a man’s face might feel like against her skin. 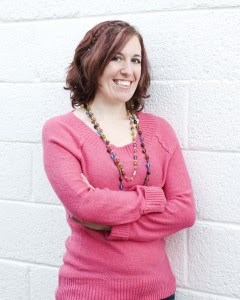 Diane Alberts has always been a dreamer with a vivid imagination, but it wasn’t until 2011 that she put her pen where her brain was, and became a published author. Since receiving her first contract offer, she has yet to stop writing. Though she lives in the mountains, she really wishes she was surrounded by a hot, sunny beach with crystal clear water. She lives in Northeast Pennsylvania with her four kids, a husband, and a Senegal parrot. In the rare moments when she’s not writing, she can usually be found hunched over one knitting project or another.

GIVEAWAY:
Tour wide for 5 eBook copies of Kill Me Tomorrow, Broken, Absolution, or Reclaimed by Diane Alberts (Winners choice of one of the books) Ends Dec. 9th
a Rafflecopter giveaway

TOUR SCHEDULE LINK:
http://fmbblogtours.blogspot.com/2012/10/tour-schedule-escape-to-me-by-diane.html
Posted by Tee at 8:52 AM