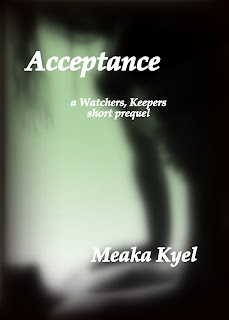 It's been six months since Cal Gains saved Taylar Wennings from a lamia and discovered the woman has the supernatural gift of tracking whatever she focuses on. Cal hunts monsters and Taylar now falls into that category. Though he's promised not to kill her until they know what she is, he does enlist the help of a fellow hunter. Is killing her an option after all they've been through together? Will he realize what he feels for her before it's too late?

Acceptance is a short prequel to Meaka Kyel's 'Watchers, Keepers' series which releases later in 2012.

Blurb for Watchers, Keepers:
For seven years now, life for Taylar Wennings and Cal Gains has been simple. Track the monsters and kill them. The fact that Taylar is a freak herself and can track anything she concentrates on is almost forgotten. That is, until Devin, a man with unusual talents himself, enters their lives. Warned that the end of life as they know it is near, Taylar and Cal step up in an attempt to help track down other freaks like Taylar; freaks who, after being hunted because of their differences, will need much convincing to join their cause.
Now that she knows more about what she is and that she isn't the only one of her kind, Taylar can finally relax... or can she? As word spreads among the hunter community, she quickly starts to make the top of everyone's hit list. If the stresses of the job and the frequent attempts on her life aren't enough, she now has to deal with Devin. Cocky, rude, and out of this world, the man who calls himself a Watcher has her skin tingling in more ways than one. Where Cal makes her feel warm and safe, Devin makes her hot and wild.
Will the three of them be able to track down those they seek? Is there truly a hope in their daunting task to stop the end of the world? 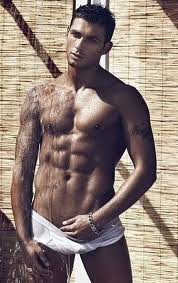