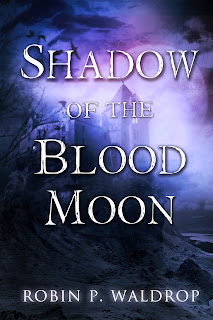 Genevieve Labreck is back with a score to settle. Her mom has been kidnapped by Zane, hybrid and all-around monster. Rumors fly that Gen’s mom is holed away in Prague, a city recognized by humans for its serene beauty and intense culture, but Gen and Will know something humans don’t. Prague is haunted by dark, evil forces.

Can Gen and Will save her mom, or will they be too late?

Some will live, others will fall. At what price do you walk away from those you love?Second book in Ties to the Blood Moon series.

BOOK ONE IN THE SERIES IS

Genevieve is a teenage girl who moves in with her aunt in Alaska after the death of her mother. Soon after her arrival she learns the things she was raised to believe only existed in fairytales are in fact a big part of her history. When it gets to be too much she seeks refuge in the arms of her new boyfriend, William, only to find out he's not who she thought he was either.

Where to stalk the Author:

Her profile on FB:
http://www.facebook.com/robinpwaldrop

Her blog:
http://robinpwaldrop.blogspot.com/
Posted by Tee at 12:10 AM