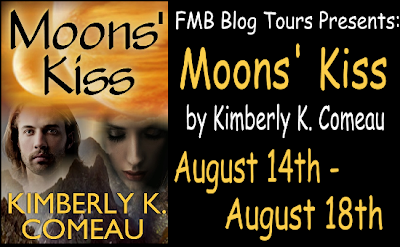 Book Description
"They found him in the South Ofrann Desert, where everything evil lived.

Manerra, heir to the tribes of Yatra, intends to abdicate--until his rescue of a man-thing from cannibals pits brother against brother and tribe against tribe. Prevented by decree from harming the creature, Manerra pledges to drive it away . . . and adds another layer of guilt to his already troubled mind.

Rebuffing all counsel, Aya, the nation’s ruler, takes steps to prevent bloodshed in future meetings between his people and the foreigners, and by so doing, hands his enemies the means to secure his downfall. As political maneuvering and violence escalate, there’s one wildcard that no one’s considered: the “demon” Kayarra. Who is he, what is he, and what do his people want?"

MY REVIEW
5 OF 5 MOONS' KISSES
Moons' Kiss is one of those rare books that creates a world that is like no other. It has it's on language Yatren and a dictionary of what the words are in the front of the book. I love when authors create a world different from the mundane worlds we see regularly. My hat goes of to Kimberly for pulling it off.

Moons' Kiss is about three brothers who have dreams of their own but when reality hits they each have to work through the path they want VS the path they will lead. One brother is easy going and wants a regular life instead he will be forced to lead a people he does not want to. Simple to him is better than politics. The other brother wants change for his people. He knows it is coming but he is not sure where it will lead and what will happen. The other brother will have to chose the fate of his people even though he does not want to.

They all want something different but the way the cards play out are not exactly how they want them. Sometimes life is easier said then done and these brothers are about to find out the greatest lesson in life and that is we never get what we want but we get what we need. Kimberly has done a STELLA job and I look forward to reading more from her. 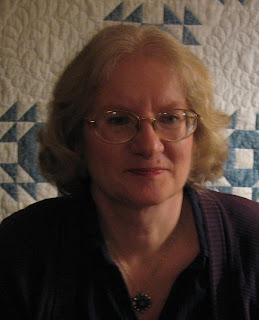 Kimberly K. Comeau was twelve when she began writing, fifteen when she published her first story, and eighteen when she won her first literary contest. Since then, she’s published short fiction, poetry and nonfiction, served as director of an online writers’ workshop, and co-founded PC Quill, a critique group comprised of award-winning writers. She lives in Richmond, Virginia, with a musician husband and two fiercely protective cats.