Sometimes following your heart can end up destroying the ones you love.

When seventeen-year-old Eviana Dumahl is faced with the responsibility of an arranged marriage and clan leadership, she is forced to choose between the life required of a mermaid and one of a teenage girl simply infatuated with the wrong guy. Kain, her devoted fiancé would make a wonderful husband except that she’s been in love with Brendan, a shape-shifting selkie, ever since they were kids. Choosing to abandon her family, her clan, and her life with Kain will have dire consequences far beyond anything she could have imagined.

A war is brewing amongst the clans and Eviana unwittingly becomes a pawn in the intricate schemes of a twisted mastermind. With Brendan’s life on the line, she has no choice but to involve those who she once considered friends. Amidst encountering senseless tragedies and immense loss, Eviana discovers that she is more valuable as a clan leader than anyone ever suspected. Her survival is not only dependent upon the loyalty of her friends, but also on her acceptance of a life that she had so adamantly tried to escape.

Promises is the first book of The Syrenka Series trilogy following Eviana and her friends through the perils of growing up in a discrete world that inherently threatens human society.

MY REVIEW
5 OF 5 MERMAIDS
Promises is a FABULOUS read! Once I started reading it I could not put it down. I had to continue reading to see what would happen. I have the honor of being on The Syrenka Series Blog Tour and I have to say this series so far is AMAZING. There is something about Mermaids and Mermen that draws you in and you can't help but want to read and read until you get to the end. In Promises there are so many twists and turns you would have never thought but the way Amber weaves her story makes it fit nice and neat.

Eviana is not your average teenager. She is a mermaid who who is engaged to a mermen Kain but she is dating a Selkie Brendan. Her parents do not approve of their relationship which causes problems between them. They decide to run away to be together and once they do that a war starts to brew. Eviana is going to have to be strong and stand up for what she believes in but she is also a pawn in the war between clans. She will have to use her leadership status to bring the clans together.

What will Eviana do? Will she stay with the love of her life Brandan or will she marry her pre picked husband Kain? Eviana will have to be strong and make decisions that will effect more than just her and her true love. I have to say I really do love how Amber did this love triangle because both guys are perfect in every way so it is hard for Eviana to choose but She opened up to Kain in the end. So we will have to see in book two what happens between her and Kain.This is a summer must read! 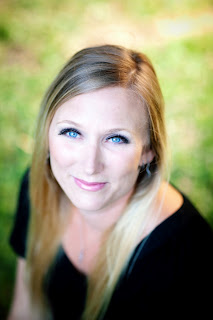 Amber Garr spends her days conducting scientific experiments and wondering if her next door neighbor is secretly a vampire. Born in Pennsylvania, she lives in Florida with her husband and their furry kids. Her childhood imaginary friend was a witch, Halloween is sacred, and she is certain that she has a supernatural sense of smell. She writes both adult and young adult urban fantasies and when not obsessing over the unknown, she can be found dancing, reading, or enjoying a good movie.

Follow along on this tour for more reviews and interviews: http://bookshelfconfessions.blogspot.com/2012/07/now-scheduling-syrenka-series-tour.html
Posted by Tee at 3:07 AM