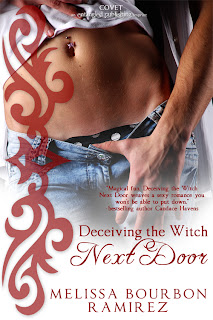 Storie Bell has a little secret—she’s a witch. But magic hasn’t exactly kept her life from being a complete mess—her love life is non-existent and the town thinks she’s a total nutter. Plus there’s her neighbor Reid Malone who runs hot one minute and cold the next.

Reid Malone can’t wait to escape Bloomington, Texas. Unfortunately, he’s stuck where he is unless he helps his father hide a very illegal secret. The only key to Reid’s freedom lies with the eccentric Storie…and he’ll do whatever it takes to get the information he needs from her.

But Reid’s holding something back. Something big. And if he’s not careful, he’ll find out exactly what happens when you try to deceive a witch…

5 OF 5 WITCHES AND COWBOYS

Entangled has done it again! I just love to read their books because I always know I am going to get a vacation of a life time. With DTWND it was no different. Melissa put together a cast of characters that made me laugh out loud so much my children thought I was cracking up.

Storie Bell lord have mercy where to start with her. She has a secret that she keeps close to her heart.She is a witch and she tries to never use her powers or show them to anyone. As it is the town folks think she is crazy as hell so they stay away from her and make her feel like a leper. Then her father passes away and leaves her a gas station and she decides to turn it into a cafe. But Storie being Storie knows there is trouble brewing because she can feel it. The trouble we find out is the Hot cowboy next door Reid Malone. He and Storie almost shared a night together and she has stayed away from him ever since. So when Reid comes back and peruses her like no ones business she is very suspicious of him.

Reid Malone all he wants to do is leave Texas and never come back. He wants to start a new life where he can live like he wants. But he has obligations to take care of his father and when his father asks him for a huge favor he is torn between doing that favor and the person his father wants him to deceive. Reid knows you don't mess with Storie Bell and live to tell it. What is Reid to do in this situation? Follow what his father tells him to do or follow his heart? In the end what he is left thinking is is it worth it to deceive a witch or deceive a heart?

This is such a fun read that will make you laugh and swoon over Reid. Meet some great secondary characters like Harper and Reid's father. Melissa you have rocked it with DAWND!

Melissa Bourbon, who sometimes answers to her Latina-by-marriage name Misa Ramirez, gave up teaching middle and high school kids in Northern California to write full-time amidst horses and Longhorns in North Texas. She fantasizes about spending summers writing in quaint, cozy locales, has a love/hate relationship with yoga and chocolate, is devoted to her family, and can’t believe she’s lucky enough to be living the life of her dreams.

Today I would like to thank Melissa Bourbon Ramirez author of Deceiving the Witch Next Door to Kaidans Seduction. Melissa you have written several books for Entangled and each one is like having a vacation. Every time I read one I get swept away in a new world with new characters.

What gave you the idea to write Deceiving the Witch Next Door?

Thank you so much! What a huge compliment T

The idea for Deceiving the Witch Next Door came about when I happened upon a real live shop called the Storiebook Café in a little Texas town. I met the original Storie and knew I had to create a story around her shop. I also love magical realism and light paranormal, so to blend the location and concept with these magical element was the perfect blend.

What music did you listen to while writing?

I actually don’t listen to a lot of music while I write, but when I want to make sure I capture the Southern flare, I listen to Sirius XM’s The Highway. I had on some Chris Young and Luke Bryan!

What did Reid think would happen if Storie found out he was deceiving her?

Why did Reid hide his feelings from Storie for so long?

She ran away, and he went back to college, so it was really a case of not being together and on the same page at the same time.

What does Storie really think about her mother?

Ooo, that’s complicated! What she thought at the beginning of the story and what she thinks at the end are different since she has new revelations about her childhood. Let’s just say that the relationship will continue to develop as we get into book two.

If you could pick one song for Storie and Reid what would it be and why?

I think it would have to be the Chris Young song Tomorrow. They have a moment with that song in the book.

Can you give us three random secrets about Storie and Reid that we did not get to read about?

2. Reid and Storie both want to have four children… and they will!

3. Reid and Storie move into a quaint and charming Victorian off the town square and have big lives in their small town.

Melissa, thank you again for stopping buy Kaidans Seduction and sharing your pearls of writing wisdom with us. You have a huge following and we are looking forward to more books from you.

Thank you SO much! I appreciate every reader, love books, and think you are so amazing for sharing your passion for books with others.

Reluctantly, he seeks her help to get to the bottom of the disturbing animal mutilations, only to have her break through to his sullen son...and rekindle the love he’d thought was lost forever. But her refusal to share a terrible secret sends her running straight into the lair of the chupacabra, plunging her back into her worst nightmare, and forcing them both to confront the wrongs of the past—in order to stay alive for the future they desperately want.

Also by Melissa Bourbon Ramirez: Bare Naked Lola
Going undercover is second nature for Private Investigator Lola Cruz, but she’s out of her league when the case of a murdered Royals Courtside Dancer leads her to a local nudist resort. Parading around the sidelines of Sacramento’s professional basketball scene in a barely-there cheerleading outfit is one thing—but parading around in nothing but smile? If she has any chance of hiding this from her traditional family and on-again/off-again boyfriend Jack, she’s going to have a lot more than her duct tape bra and killer dance moves to keep under wraps….
Posted by Tee at 2:10 AM