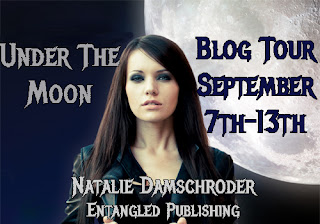 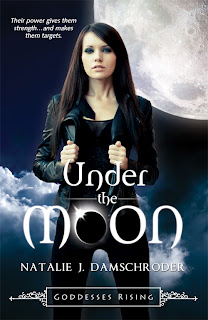 Their power gives them strength...and makes them targets.

Quinn Caldwell is the epitome of a modern goddess. Her power source is
the moon, her abilities restricted only by physical resources and lunar
phase. She runs a consulting business and her father's bar, serves on
the board of the ancient Society for Goddess Education and Defense, and
yearns for Nick Jarrett, professional goddess protector and the soul
mate she can never have.

But someone has developed the rare and difficult ability to drain a
goddess of her powers, and Quinn is a target. With the world thinking
Nick has gone rogue (whatever that means) and that Quinn is influenced
by "family ties" she didn't know she had, keeping themselves safe while
working to find the enemy proves harder each day.

But not as hard as denying their hearts... 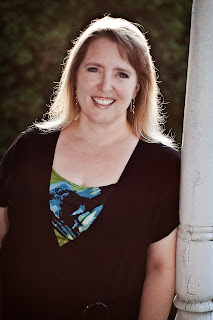 Natalie J. Damschroder became a writer the hard way—by avoiding it.
Though she wrote her first book at age six (My Very Own Reading Book)
and received accolades for her academic writing (Ruth Davies Award for
Excellence in Writing for a paper on deforestation her senior year in
college), she hated doing it. Colonial food and the habits of the
European Starling just weren’t her thing.


Shortly after graduating from college, however, she found her
niche—romantic fiction. After an internship with the National Geographic
Society, customer service for a phone company just wasn’t that exciting.
So she began learning how to write the books she’d loved to read all her
life. Four books and six years later, she finally sold.

Now she struggles to balance her frenetic writing life (how else can she get all
the stories in her head on paper?) with her family, the most supportive
husband in the world and two beautiful, intelligent, stubborn,
independent daughters (the oldest of whom has become a writer). She
somehow also fits in a day job and various volunteer positions in and
out of the writing industry.

Natalie’s published works include 8 romance novels (with four more on
their way!), 7 novellas, and 14 short stories.

Under the Moon by Natalie J. Damschroder Chapter One (part 6 of 7)
Bracing one hand on the rough wood planks of the outer wall, Quinn yanked on the warped back door, taking a moment to prop it wide and let in the sunlight and crisp October breeze. Not stalling. Just…setting up. She paused on the threshold to let her eyes adjust to the dim office. Her desk was how she’d left it the night before, with piles of invoices and orders to approve, checks to sign, and client files to review. Dust floated in the beam of sunlight that hit the floor in front of her feet. Quinn forced herself to look deeper into the room to Sam’s desk, usually as full as hers, if more neatly organized. She held her breath as her vision sharpened, and movement turned into Sam’s hand making sharp notations on a printed spreadsheet. He flipped open a file and tapped a few keys on his keyboard without looking up at her. “How long did you sleep?” he asked. Breathing was suddenly easier than anything she’d done so far today. Sam asked her that every damned morning. “Eight hours, thirty-three minutes.” Her perfect internal clock had amused and delighted him at first, then became nagging when he used it to manage her, whether over how long she’d slept, gone without eating, or focused on a client. But that was what he was paid for, after all, and she welcomed the symbol of normalcy. He nodded his approval and kept working. Quinn went to her desk and booted up her computer. Sam said, “You hear from Nick?” “No.” The ongoing lack of contact after the urgency of his call scared her. “Sam, I—” He shoved to his feet and headed out front. “We’re low on vodka. I’ll pull some up.” Quinn sighed and slumped. So much for normalcy. It didn’t get better. Sam worked out front while she stayed in the office. When she went into the bar, he retreated to the back. She stopped trying to talk to him, hoping the space would be a buffer both for their personal and professional relationships, and for her fading moon lust. There was still no word from Nick. Finally, Quinn settled herself in a corner of the bar with her laptop to handle stuff that had piled up over the week, hoping her full e-mail in-box and the routine work, the easy decisions, would keep her eyes off the clock. Requests for appointments and vendor info she forwarded to Sam. Most of the rest was related to the Society. Quinn served as the board’s secretary, and many of her personal e-mails were about the annual Society meeting next week. Those she moved into a folder to address later. The official Society list e-mail was full of political posts, with elections coming up in November, but she skimmed and deleted most of them. She’d gotten into such a rhythm that when Nick’s name appeared, it was a moment before her reaction caught up. The words were innocuous at first, so she didn’t understand the fear filling her until it merged with her ongoing low-level anxiety over last night’s phone call. I plan to ask Quinn to put this on the agenda for the meeting, but I thought you should all know ahead of time, so you can be careful. Nick Jarrett’s gone rogue. Quinn pulled her cell phone out of her pocket to try to reach Nick yet again. This had to be why he was coming here—but what the hell did it mean and what did it have to do with her? A crash on the other side of the room redirected her alarm. She was on her feet before she’d even spotted the source of the disruption. “I’ll goddamn keep drinking if I wanna keep drinking!” An old man, greasy gray hair hanging below a dingy trucker cap, wobbled in front of his overturned chair, arms flailing. Despite his obvious intoxication, his aim was good enough to hit Katie’s tray and send glasses flying. Quinn stormed across the room, glaring at anyone who looked like they might want to join the fight. None of her regulars moved. Most had seen her in action, and they didn’t want to get involved. A few strangers half rose but subsided when they saw her striding to the rescue. Not that Katie needed rescuing. Nearly as tall as Quinn’s five feet ten, the young woman had honed her manner and strength in New York City. By the time Quinn reached them, Katie was quietly telling the drunk how he was expected to behave in Under the Moon. Quinn’s heart rate and footsteps slowed, ready to back up her waitress but also willing to let her handle it. Then the drunk fumbled a switchblade out of his pocket and flicked it open.

Under the Moon Amazon | Barnes & Noble | Books a Million |

Their power gives them strength…and makes them targets. Quinn Caldwell is the epitome of a modern goddess. Her power source is the moon, her abilities restricted only by physical resources and lunar phase. She runs a consulting business and her father’s bar, serves on the board of the ancient Society for Goddess Education and Defense, and yearns for Nickity to drain a goddess of her powers, and Quinn is a target. With the world thinking Nick has gone rogue (whatever that means) and that Quinn is influenced by “family ties” she didn’t know she had, keeping themselves safe while working to find the enemy proves harder each day. But not as hard as denying their hearts…

Look for Heavy Metal, Book 2 in the Goddesses Rising series, in March 2013! Natalie J. Damschroder grew up in Massachusetts, and loves the New England Patriots more than anything. (Except her family. And writing and reading. And popcorn.) When she's not writing romantic adventure for Carina Press and paranormal romance for Entangled Publishing, she does freelance editing and works part time as a chiropractic assistant. She and her husband have two daughters they've dubbed "the anti-teenagers," one of whom is also a novelist. (The other one prefers math. Smart kid. Practical.)

You can learn more about Natalie and her books at her website, Goodreads, Twitter, and Facebook. She blogs with a number of fantastic romance authors at Everybody Needs a Little Romance and just to hear herself talk at Indulge Yourself.

LINKS TO FIND NATALIE AND BUY HER BOOKS:

a Rafflecopter giveaway
Posted by Tee at 6:00 AM