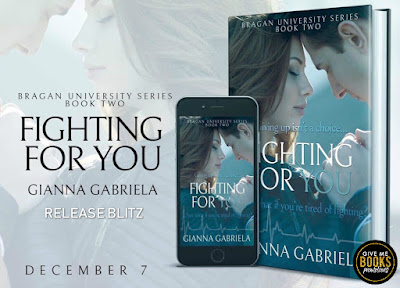 Jesse Falcon has dedicated his life to one cause: to fight against that which has taken so much from him.

He’s learned the hard way that if you want something to be done, you have to do it yourself.

No more waiting for others to make a difference.

With football, a pre-med program and a coveted internship, he has no time for anything or anyone else. The truth is, he doesn’t think his barely healed heart can take it.

Despite his determination to remain distant, he soon finds a girl who will not only fracture that resolve but shatter it completely.

She has a group of friends, and enough gossip lingers in the halls to make her days interesting.

Her whole world changes in a heartbeat though - one blackout, and a week-long fever forces her into a battle she isn’t prepared to fight.

The odds are stacked against her.

Will she have the strength to prevail?

🌟🌟🌟🌟🌟
First Gianna has outdone herself and she has brought it to the table! I am simply in awe of this story and my heart broke and GG put it back together again. This is one of those stories that will stay with you long after you have read it. There is everything in story that grips you by the heart and leaves you breathless.

Jesse is on the football team and he is a pre-med student. He is living his life by studying and playing hard. He does an internship at the local hospital where he meets Zoe. They soon become friends and spend time together. But Jesse and Zoe feel something for one another but they both have pasts that haunt them and they both don't want to get hurt again.

Can Zoe and Jesse move on from the past to move towards the future? Or will they remain friends so no one gets hurt? GG has brought her A game and I was rooting for Jesse and Zoe. This is a must must read for all romance readers!

Every time I near her door, I struggle to go inside. I hate being in the hospital. The smell is a mixture of things, all inescapable. The most prevalent is the jumble of two emotions—happiness and sorrow. Some people laugh. Some people cry; it all depends on the day.

I force myself to stand outside her door for a few more minutes. Who would’ve thought that I’d be here? Who would’ve thought I’d be spending my afternoons in a hospital entertaining her while she fights for her life? Not me. And I’m sure as hell she didn’t expect to be here either.

No one should expect to be here because no one ever should.

Although my feet want to remain frozen, I take a deep breath and force myself to knock. I wait a few minutes, but no one answers. I press my ear to the door, hearing no noises coming from the other side. Maybe she’s sleeping. I should come back another time, I tell myself, but I know I’m just trying to find a reason not to go into that room. Instead, I do what anyone in my position would do; I fight my cowardice, my desire to run away.

I open the door and let myself in. I’m immediately greeted by an empty space. Even for a hospital, it looks too clinical. The bed is made, the machines have been put away, and the flowers that were here yesterday are gone. There’s no sign that someone was here. No sign that she had been here before.

Immediately, I get the feeling that something is wrong.

Cancer.
That is the word ringing in my ears.
I have cancer.
Cancer.
Me.
I have it.

The word continues to loop like a bad soundtrack in my mind. It’s on repeat, but I struggle to comprehend it. I hear my mother’s cry and turn in her direction just in time to see my father bringing his arms around her to keep her suddenly limp body from hitting the ground. Her reaction is what tells me I’ve heard the doctor right.

I think back at how I ended up here. One second, I was on the phone with my mother, telling her about this fever that wouldn’t go away. Even with the fever, I remember telling her how excited I was to finally get a break from school and spend my time with her and Dad. She kept insisting I get myself to the hospital, but I refused. I thought it was nothing…but it persisted. The fever didn’t go away, so I finally decided to listen to my mother.

A fever. That’s all I thought I had, but I was wrong.

I have Acute Lymphoblastic Leukemia.

Leukemia.
Cancer.
Me.
I have it.

The rest of the doctor’s words are lost on me as I feel as if I’m not really in my body anymore, I’m not in this room anymore. Suddenly, I’m lightheaded and my vision blurs.

“Are you okay, Zoe?” I think I hear someone say, but before I can answer, everything goes dark.

FREE for a VERY limited time!!

Gianna Gabriela is a small-town girl living in the Big Ol’ City of New York. She’s been reading for years and calls it her addiction. Her favorite genre to read is anything in the YA, NA, and Contemporary Romance realm. She's a writer of the sexy alphas you want and the strong heroines you need.